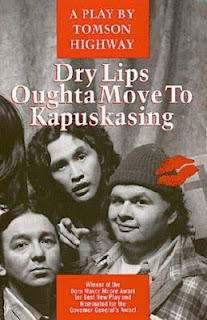 With all the disruption of moving from my home of 20 years, waiting for deliveries, trying to get organized and establish a routine, I missed my reading goal of one book a week. So I was happy to spend leap-year day with this slim volume by a favourite former-Manitoban writer. This copy, which I found at Value Village, has a great 25+-year-old cover photograph of famous Canadian First Nations actors--Gary Farmer, Errol Kinistino, Billy Merasty, Graham Greene.

I love Tomson Highway. His humour. His voice. The music in his writing. The Cree-ness of his work. The way he incorporates mythology. The way his characters seem so real, at the same time as they fade in and out of other realities. The way in his novel The Kiss of the Fur Queen the brothers hover for shelter in the midst of a caribou migration, like cowboys during a buffalo stampede in old western movies.

This Tomson Highway play, Dry Lips Oughta Move To Kapuskasing, is the male companion piece to The Rez Sisters, except that hockey replaces bingo as the game of their lives. The road into this reserve is a rough one. On my first reading, I found Dry Lips to be somewhat confusing and very disturbing. There are laughs. There is nudity. There is sex. There is blood. There is violence. There are issues. Fornication. Monogamy. Adultery. Illegitimacy. Homophobia. The madonna/whore dichotomy. I can see why the play suffered from some very unfavorable reviews accusing it of negative and abusive attitudes towards Indigenous women. I can also see that a Cree playwright will have major challenges. For whom are you writing? Just who is the target? Will an urban mainstream audience "get it" or will they see only stereotypes of "the other" and their worst fears realized?

A Cree audience, or any northern reserve audience, will recognize everything and everyone and every theme in this play. Substance abuse. Promiscuity. Practical jokes. Fetal Alcohol Syndrome. Preachers. Powwow Dancers. Entrepreneurs. Pregnant, hugely pregnant women. Women of varied shapes and sizes. Hockey. Suicide. Violence. Nature. Knitting. Parental anxiety. But, is there a Cree audience for live theatre? How does the writer reach them? The most positive thing I can think is that perhaps art like this can help us communicate across those cultural divides -- Cree/First Nations and "White"/newcomer [I hate that term "settler"] culture, rural and urban, male and female.

I had to think about these things for some time. I found a critical essay on line which mapped a useful way "into" the drama.* The First Approach off the highway leads into the field at the sign saying DREAMLAND. The whole play is a dream. A nightmare. Your (and the main character Zachary's) worst fears, incarnate. The Second Approach is at the sign saying TRICKSTER CROSSING. All the fear-inducing female characters the nightmare men interact with are played by the omniscient androgynous shape-shifting male/female Trickster saviour--Nanabush in Ojibway, Weesageechak in Cree. All right? So, it's not really happening. And those characters up there on stage are all your worst fears come to life.

The first phrase uttered in the play is "Hey, bitch!" That's your first clue. There is something wrong here. And something wrong with the guy who says/thinks it. And the abuses pile higher and higher. Disrespect for women. Sexualization of women. Failure to care for pregnant women. Failure to acknowledge and accept responsibility for loving and teaching the child. The old "fathers day on the reserve" joke. The power struggle between males and females. Male on female violence. Substance abuse. Suicide. Anti-church rhetoric. "There are many, many other ways of communicating with the Great Spirit. And they are all perfectly legitimate. What them priests said about me--about us--is not right. It's just not right. Respect us. Respect all people!" (p. 106) These nightmare men have been colonized by a racist and paternalistic worldview. They have lost their cultural beliefs in gender equality and mutual respect. With the poison named, a prescriptive "return to the old ways" edict follows. Nothing good can happen unless they stop the abuse and return to the old ways.

Tomson Highway is also a Trickster. He sees the humour in the darkness. And the irony -- of a plot centering upon the acceptance of an imported game, hockey. Of the closing curtain tableau, a sentimental holy family trinity.

This play was written almost thirty years ago. In the meantime we have had the Residential Schools Settlement, the apology in parliament, and the Truth and Reconciliation Commission. I don't know. I just feel as if I don't have to be told this message again. Unfortunately, we will hear a great deal of the same themes in the proposed inquiry into missing and murdered women and girls. Dry Lips says to an audience of First Nations, "We have to change. We have to go back." This play, heavy on the symbolism, shows how many appropriated prejudices of colonization continue to harm the colonized. But does it say, does it say loudly enough, to the rest of the audience, the Canadian capitalists paying to peer through that invisible wall, "Look what you have done! What are you going to do to fix yourselves?" I wish. I hope.

* www.rupkatha.com Diehl, Lindsay. University of British Columbia, Okanagan Campus. "And What Are You Dreaming About?": An Analysis of Tomson Highway's Dry Lips Oughta Move to Kapuskasing. Rupkatha Journal on Interdisciplinary Studies in Humanities. Vol. VI, No. 2, 2014.