Fear and Loathing In Las Vegas 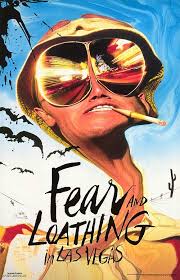 Fear and Loathing in Las Vegas was first published in 1971 in Rolling Stone magazine and reprinted to tie in with the release of the 1998 movie starring Johnny Depp as the Hunter S. Thompson-like protagonist, Raoul Duke. Although protagonist may be a bit of a stretch. For someone like me, not enamoured with the romance of substance use, abuse, and addiction. I accept that a journalist must be a contrary, willing to question the status quo. However, it seems to me that the grandiose description of psychedelic substance use distracts from, even undermines the themes of abuse of power, authorities out of touch with their communities/constituencies, corrupt lawyers, casual gun handling, the pervasiveness of organized crime. Not to mention the role of females in the story--a disturbed runaway artist drugged and raped, a retired stripper turned waitress insulted by customers, and an elderly hotel maid left to tidy up a room trashed by naked puking men. All in the name of fun.

Thompson is the preeminent Gonzo journalist, reporting as he does, in 1970, as a participant, from the inside of Sin City (a motorcycle race and a convention of District Attorneys, in Fear and Loathing In Las Vegas), horse racing (The Kentucky Derby Is Decadent and Depraved), the Chicano community in California (Strange Rumblings In Aztlan). Thompson's reputation remains strong, based on his acute observations, his oh-so-readable style, and the laugh-out-loud descriptions of events, situations, which I'm glad I have never had to witness in person. I think what strikes me most is the depiction of the many layers and sub-cultures making up the supposedly greatest democracy, and the "bureaucratic fascism" [p. 214] of the way the so-called leaders and people in positions of power are so out of touch with and unconcerned about any layers other than their own. Or am I reading too much into this romp? Doesn't his subtitle say it all? A Savage Journey To the Heart Of the American Dream, by a writer who seems too cool to care.