Only Drunks and Children Tell the Truth 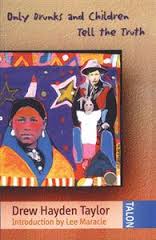 Thanks to Elsie for loaning me this book. Only Drunks... , a sequel to Taylor's Someday, addresses the identity crises of adopted Indian children scooped from their families and communities and raised in White culture. The birth mother Anne, who Janice met for a few hours the previous year, has died and Janice's sister Barb comes to Toronto to retrieve her and bring her home again. This play again (as with Tomson Highway's Dry Lips...) struggles with an aboriginal writer's dilemma. Who is the audience? And how can he tell a story which will be viewed totally differently by people from the different cultures. Although he does not tell the "crabs in a bucket" story, the opening scenes evoked its memory in this reader. Speaking as an outsider, to me, Barb and her two sidekicks seem to be bullying Janice and seem oblivious to her conflicts and struggles. They also project a "holier-than-thou" attitude towards her, assuming that they know what is best for her and what she "should" do. The one-liners are stale, but the play is twenty years old so I'll give him the benefit. And they would likely be more appreciated by the native audience who could get a laugh at recognizing the familiar of the unfamiliar stage set. The dreamcatcher too suffers from over-exposure and commercialism since the end of the twentieth century. The many stereotypes are also disconcerting. The family moving in to your city apartment. The Indian male "putting the moves on" every female he meets (which just seems to link "trickster" with "manipulator"). The belief that children are apprehended because of alcoholism in the home. And the belief that using alcohol is a positive way to bond. So not my experience, and one opinion I stereotypically associate with addiction and denial.

Hidden beneath the discomfort for me is also a new awareness of the grief experienced by the mothers who lost children and the impact of that grieving mother on the subsequent siblings. And the cognitive dissonance experienced by Janice, a trained lawyer who believes in "the system," to cope with the idea that "the system" caused the scoop and its subsequent consequences. This for me parallels the way the rest of us experience such cognitive dissonance about the residential school system scoops. We didn't do it (meaning I personally do not feel responsible for what happened). Most of those who worked within the system were sincere in their belief that they were helping educate children. Not everyone was an abuser or a criminal. Corporal punishment was the norm in all schools everywhere for most of those years. Many former students are appreciative of the education they received. I have heard some say they are glad they learned English at school and that they revel in their Christian faith. However, we have real difficulty teasing out all the issues involved, and putting our fingers on the biggest knot--the racism behind the belief that this sort of education was best for Indian children. That the ways of the colonizers were superior to the beliefs and customs of the First Nations people. And furthermore, we have difficulty accepting that those of us who believe that "educating the children" was for the best are racist--accidental, unconscious, or otherwise.

And What do we do about that?