May 2018 selection for the Hawthorne Book Club. A novel of Newfoundland and WWII. 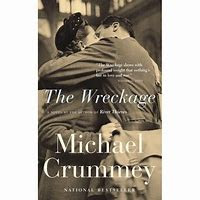 The Wreckage by Michael Crummey is a novel of Newfoundland and World War II. It opens in the Pacific, with a Japanese soldier with a Canadian connection promoted to work in a POW camp.

The main plot line involves a young couple, Wish and Sadie, who meet and are attracted to each other in an island outport. Religious prejudice is one of the problems keeping them apart. Wish, thinking he has killed Sadie’s brother Hardy, runs away to Halifax and enlists. Gets to Singapore. Is captured and sent to the POW camp where the Canadian-Japanese guard tortures him and his friends.

In the meantime, Sadie escapes the island and moves to St. John’s, looking for and then waiting for Wish. With nothing heard in over three years, she gives in to her American suitor and, pregnant, moves with him to the States where they marry and raise a family. Fifty years later Sadie returns to St. John’s with Johnny’s ashes and she and Wish re-connect.

We had an interesting discussion centering around: writer bio; writing style where emotions are concerned; character motivation; links between settings in space and time and between the stories of various characters (use of post-modern writing techniques); and the issue of “sadistic arousal” which is crucial to Wish’s self-image and decisions. Readers agreed that they would read more Michael Crummey.