SON OF A TRICKSTER

Loved Eden Robinson's MONKEY BEACH and this first in the TRICKSTER TRILOGY has been on my MUST READ list for three years. Now I wish I had read it earlier, because I cannot separate some of the scenes in the television series from what happens in the novel. The series is a great adaptation. Beautiful and incredible. My only hesitation is that Jared seems quite old for high school, but that's probably just me, 50 years later.

SON OF A TRICKSTER is the story of Jared, a high school student living with his Mom and her boyfriend on a reserve somewhere around Kitamat/Terrace in northern BC. Jared seems like one of those super-dependable kids (like the adult children of alcoholics); he pays his father's rent and his mother's hydro bills while coping with family breakup, violent step-fathers, unpredictable grandmothers, along with the usual teen concerns of school, friends, girlfriends, dead pets.

On one level, Jared's is a story of a child living in the chaos of a bi-polar mother with her own generational trauma, hooking up with her dealers, not averse to a bit of criminal activity to assure her own business survives. Taking in boarders relegates Jared to a curtained off corner of the mouldy basement. There are scenes and lines which made me laugh out loud. There are scenes of magic which make me wonder what is imagined and what is cultural. Jared is a survivor and you cannot help but root for him. But when you think back about it, the one thing he does repeatedly is cry. He is living a PST-inducing life.

This story really made me sorry that I was unaware of the chaos and trauma of some of the high school students I taught. It made me look up some names, to see whether they were still alive.

TRICKSTER DRIFT awaits but I am saving the pleasure. RETURN OF THE TRICKSTER is scheduled to be released this year. 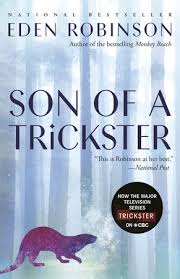