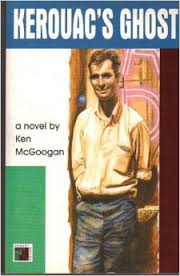 Ken McGoogan's novel Kerouac's Ghost is about passing the baton. You know that scene at the end of The Tempest when Prospero hands his magic wand to the next generation. As does Morag Gunn at the end of The Diviners? In Kerouac's Ghost, it is ten months after Jack Kerouac has died (in St. Petersburg, Florida, October, 1969). Kerouac has been researching an acceptable biographer and now his ghost, like that of Hamlet's father, visits young Frankie McCracken. "I am not happy," he implies. "There is something I want you to do for me." An annunciation, of sorts, up there, in a fire lookout tower in the Canadian Rockies, where the ghost Jack explains to Frankie all the reasons why he is "the chosen one."

Personally, I was a few years too young to have been bitten by the Kerouac bug, the groupies hitching to Haight-Ashbury with battered copies of On the Road in their backpacks, stumbling towards ecstasy--physical, pastoral, sexual, chemical. Nor have I ever been enamoured by the romance of addictions or substance abuse. And I confess to being a bit judgemental about "men" who tomcat, assuming as I do, that it is really just a case of being stuck in adolescent self-centredness, evading adult responsibility, denying any mutual respect towards fellow human beings. So this recreation of the hippy cosmology of hope-free love-faith is for me an interesting bit of historical fiction to begin with. The exploration of hero worship, mental illness, religious fanaticism, stoner oblivion, and Kerouac's self-referential editorial commentary is interesting. As is the depiction of the heavy load carried by the children of addicted parents.

In style, McGoogan moves back and forth in setting, in time, and in realities. I enjoy the literary allusions, the name-dropping, the philosophical fusion. For me, explication is helpful. I'm not big on abstractions. I never assume that what I think something means will match what anyone else thinks something means, or how anyone else interprets something. So I appreciate the guidance the omniscient writer puts into the mouths of characters. Although some editors would be screaming: "Don't tell them; trust your reader."

As Shaw says, the goal is not to "find" yourself but to "create" yourself. Neither Jack nor Frankie accept this ideal of responsibility, of internal rather than external motivation/control. They are addicted to "waiting for the signs". They seem content to be that pinball in the machine, enjoying the propulsion while someone else, some unseen other, plays the arcade game.
at May 05, 2016