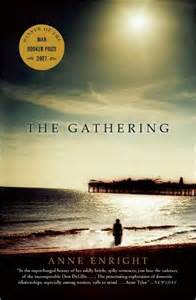 The Gathering is the first Anne Enright novel I have read. Winner of the Man Booker Prize in 2007, it is a beautifully told story of one sister, Veronica Hegarty's, grief and of her large family in Dublin gathering for the wake of her closest brother Liam who drowned walking into the sea in England. Grief. Suicide. Family dynamics. Abuse.


My only hesitation with this story is the seeming link at least in the narrator's mind between sexual abuse of children and homosexuality. This theme is more common in literature than I believe the science warrants. (Starting with Ann-Marie MacDonald's Fall On Your Knees from as far back as 1996.) The reason it disturbs me is that it seems to assume that both homosexuality and its causes are pathological. For me, this is a problem, the ghost of outmoded ideas. As I suspect it would be to most in the LGBTQ community.
at July 04, 2016