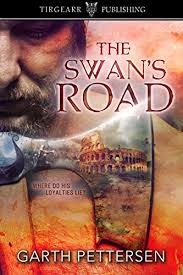 The Swan’s Road is local writer Garth Pettersen’s enjoyable historical action adventure novel, a balance of armour and amour, following the travels of a Danish youth, Harald, on the Swan’s Road to Rome, in 1027 AD. A fast-paced, character-centred tale with cinematic scenes of accidents enroute, encounters, ambushes, arm-to-arm combat, in the context of familial and romantic longings. Loyalties are contested and identities in doubt as Harald rushes to meet up with his father King Cnute at the coronation of the Holy Roman Emperor.


Personally, I also enjoyed the author’s Historical Notes at the end of The Swan’s Road, about the process of researching and writing, the historical accuracies and additions, and the careful vocabulary choices consistent with the development of the language used in Engla-lond at the time. Looking forward to Garth Pettersen’s next installments about the politics of Europe and the romance of Harald and Selia.
at December 10, 2017