Found a slim paperback of this thriller at the Rotary Book Sale, outdoors, a couple of weeks ago. Have never seen the films. Enjoyed the action-packed adventure, from London to Scotland to Kent along the Thames. First person voice of Richard Hannay. With commentary about spying, and political unrest in "the Balkans" and German subterfuge leading to the Great War.

Checked out too info about John Buchan as I knew he had been Governor General of Canada. That Tweedsmuir Park is named for him. That he was Scots, had written several novels, after a career that took him to Africa and the Boer War. Was PATH OF A KING his, that we read in high school? I am surprised to learn that he had shepherded Canada through the abdication crisis, and the year George VI actually became the "King of Canada". That he died while in office, after a head injury caused by a fall after a stroke. A state funeral in Canada, February, 1940.

I cannot find the exact cover image on my Penguin Classics copy but I like these two. Both show Hannay hiding out in the hills of Scotland, and the importance of train travel and airplane surveillance to the plot. Who knew? 1915. 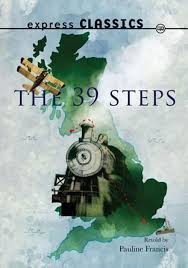 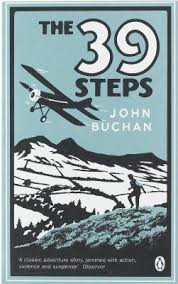