I wanted to read this book because I had heard it referenced in some creative non-fiction writing as a great example of the technique of braiding stories. Billy Pilgrim, as a very young soldier, witnessed the fire-bombing of Dresden. Twenty years later, after he has trained as an optometrist, married the bosses daughter, runs his own and several other offices, attempts to research and come to terms with what he saw and learned when he was one of the child soldiers. Ironically, for me, he too references the 19th century book from which Penny got her title, The Madness of Crowds. It is a wonderful read. I especially remember the scene where Billy imagines the bombs going back up into the planes, the planes back to base, the bombs back to the factories where they were made, the metal used to make them going back into the ground. 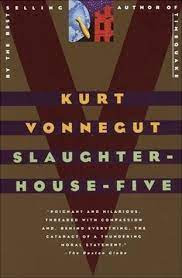