The latest University of Manitoba Book Club selection. FIVE LITTLE INDIANS follows former students of a Mission School on an island off the west coast of British Columbia. Kenny. Lucy. Maisie. Clara. Howie. Also Lily, a child who died of TB, Kendra, Kenny and Lucy's daughter, and Mariah, a medicine woman. And the boys' mothers. And the Sister in charge of the school. Very touching accounts of the anger and lack of preparation for life experienced by the children who leave the school. The intergenerational trauma. The racial discrimination and systemic abuse of human rights. The stark jump over twenty years to include the opportunities for recourse offered by the Residential Schools Settlement program was a bit jarring. Some details, especially reference to parole board decision-making, seemed wrong. Also, the kidnapping in Vancouver of a six-year old boy from Red Pheasant, SK, seems so wrong that it is hard to believe it happened. I guess that goes for the whole mess of attempted assimilation. And for the beliefs which supported colonization from 1500 to the present day. 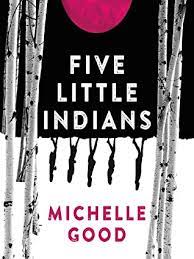