HOW THE DEAD SPEAK

I had never heard of this writer, this award-winning Scottish writer of dozens of crime novels and others, until a friend loaned me two titles the very week that I got hooked on a new Knowledge Network drama TRACES, set in Dundee and attributed to Val McDermid. Synchronicity.

In this story, her crime-fighting team are post disaster. Psychologist/profiler Tony Hill is in jail for murder. Former DCI Jordon has retired to avoid being fired and is battling PTSD. Tony is writing a book and trying to make prison life and the world in general better by working from the inside. Carol is approached to do two investigations "off the grid". One involves Tony's hated mother, Vanessa. The other involves a group of professionals working on "wrongful conviction" cases. Their old CSI-like teammates are struggling to adapt to a backwards new leader during a historic graves case which shifts into a serial murder chase.

I was especially interested in the prison scenes and the info about PTSD. 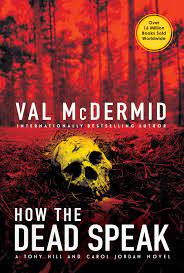