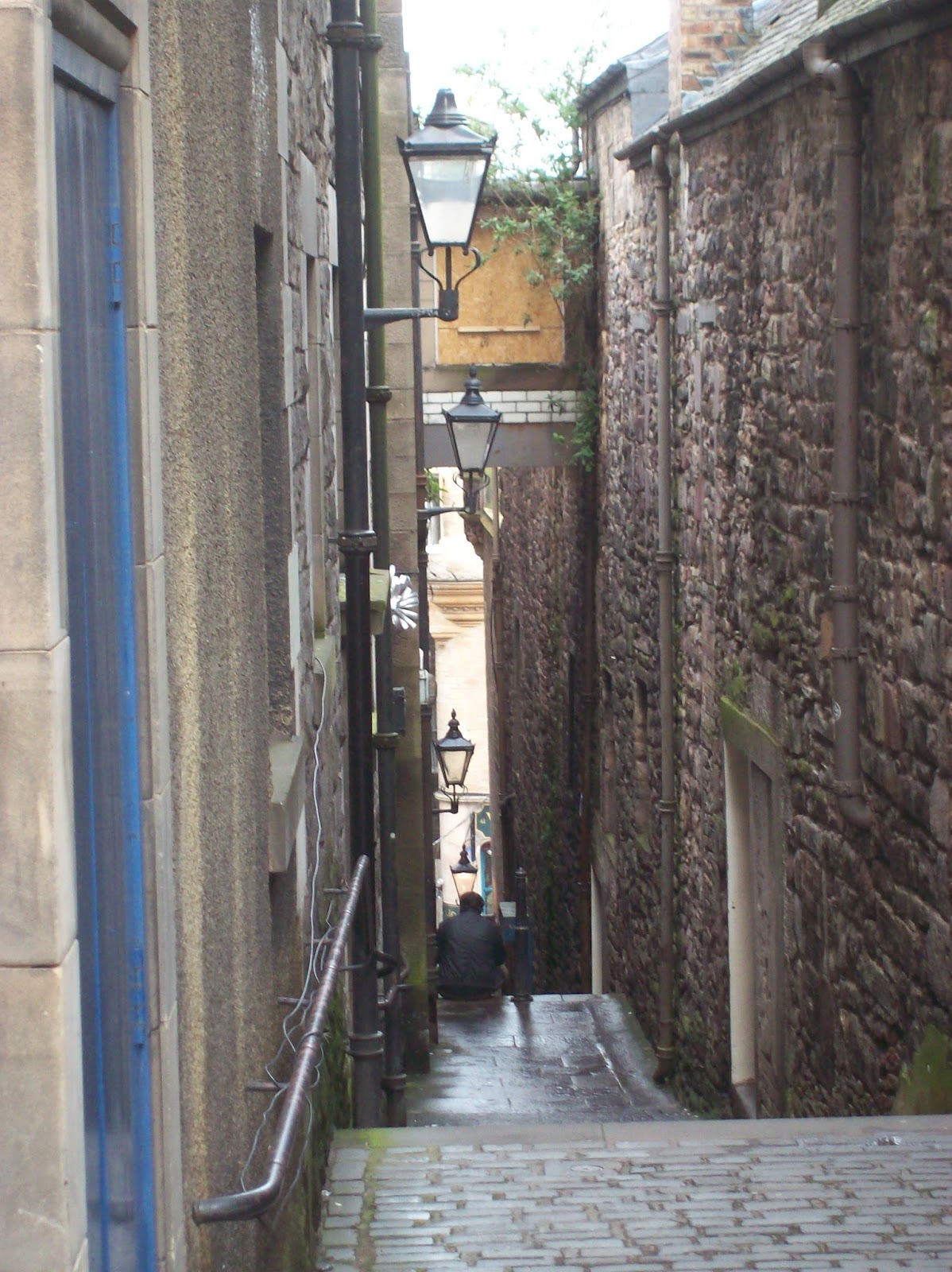 
Imagine it is dark, nighttime, in a close such as this one in Edinburgh where De Quincey lived and is buried. Imagine access to a nether world, to an underground culture of beggars and street people.


(7) And whack again. There's one last head. Murder as a Fine Art is a novel of ideas. For beneath all the blood and gore, beneath the horror, Morrell's London of 1854 is a labyrinth and the quest for "the artist of death" is a hunt for a minotaur, that misbegotten creature born of human failures, demanding a tribute of blood sacrifice. Evil with a beating heart. And the green maze within London's two thousand miles of dark streets constitute one big labyrinth. This is a story about the reality of evil in the world, and our attempts to contain it. About the relationship between evil and crime. Maybe even about the role of the artist in confronting the evils of the world, the evil within us born as we are in sin, the evil which we delude ourselves into believing that it does not exist.

A seven-headed monster. But is it truly misbegotten, or are its multi-facets deliberate? The way some people see a minotaur as a hybrid born of the marriage of the divine and the human? The idea of "hybrid" is true to the way Morrell, no matter what his subject, always inserts both action and ideas, or, in literary terms, text and subtext. After all, wasn't that what was most appealing about First Blood? There were reasons why Rambo did what he did. His monstrous deeds were in a sense a product of his nation's sins. Of his nation's political choices underlying its international "police" action. Action and reaction. Good cop, bad cop. You could take it even further. If the minotaur has been killed, is it the death of the divine, the death of mystery? In which case, the space has been created for the mystery writer, the novelists and screenwriters, to fulfill that need we have for fear and terror. For awe.

I "follow" David Morrell and have read others though not nearly all of his 40+ published works. It all started when I moved here to Hope, BC, where Morrell's First Blood was filmed. When the release of MaaFA coincided with my planned trip to England, I decided to make the novel my first ever purchased new release on my new tablet. Done. I read it beginning and ending in London, failing to notice, that first time through, the references to Grasmere and Edinburgh where I also visited.

Then the novel sent me to Gutenberg. I needed to know more about Thomas De Quincey, one of the main characters in the story. Confessions of an English Opium-Eater. On Murder Considered As One of the Fine Arts. The English Mail-Coach. On the Knocking at the Gate In Macbeth. Suspiriade Profundis (Sigh from the Depths). Addicted to laudanum, was De Quincey really advocating the use of the drug? Not the way I read It. But definitely an interesting account of addiction, of self-medicating, of mood-elevating, of increasing tolerance, of attempting to reduce usage, to maintain, and to function, to work, to support a family of nine, while still using. On Murder Considered As One of the Fine Arts seems first to be an exercise in humour, satire, irony, but moves into an analysis which points out that there are different kinds of murder, and that a mass murder of innocents executed after careful planning and preparation seemingly has something other than death as its goal. Why am I thinking of the Oklahoma City bombing? Its message is directed at the living, and the "creator" of the scene is most likely attempting to manipulate something. Opinion, or feelings of terror in those readers and viewers whose interest has been piqued by his actions. Is there a suggestion that such murders did not happen before mass media existed to "spread the fear"? Is not this the point of the details about the five dozen newspapers in London in 1811, and later, the mail-coach delivering London news to Manchester that same day, and, in 1854, the telegraph, spreading fear and terror instantaneously? Media prepare the canvases for the murderer artists, their greatest performances pieces.

The mail-coach essay begins as an exercise in style. De Quincey attempts to write about motion, speed, in an onomatopoetic way, taking the readers breath away, before he makes the leap from motion, speed, to sudden death, near death, and fear of death, to nightmares and how they link both to memory, remembered acts, and to remembered emotion. How the brain collates the fear and relief after a near-miss highway accident with the feelings aroused by the news of the victory at Waterloo. In the knocking at the gate in Macbeth, the murderers who have abandoned that which makes us human, "the divine nature of love and mercy," are reminded that the "reaction" has commenced, "the pulses of life are beginning to beat again." Stylistically, Shakespeare intuited, De Quincey says, that when we hear of murder, we automatically identify with the victim and think of self-preservation, but the dramatist requires that we think of the murderers. The knocking forces us to do that. We hear what they hear. At the same time, the knocking reminds the murderers that they are surrounded by convention and goodness. By representatives of authority holding back the threatening masses. In Suspiriade Profundis De Quincey explores how suffering develops the intellect and the spirit. "Now there is in the dark places of the human spirit--in grief, in fear, in vindictive wrath--a power of self-projection not unlike this [shadow play]." And, as in all good crime drama when order is restored, he believes "the energies of destruction must be equal to those of creation." That balance will return.

Many ideas explored in Murder as a Fine Art are ideas explored in De Quincey's published writing. Morrell has spoken [Afterword] of how a reference to De Quincey in a film about Charles Darwin's psychosomatic illnesses prompted the what-ifs which first gave him his plot. "[T]hat we're influenced by thoughts and emotions we don't know we have." On the surface, it is the murderer who seems not to comprehend the real motivations behind his action, who rationalizes, blames others, sets victims up. De Quincey confronts the delusions with a ghost from the past, and with hard physical evidence, puncturing the barrier between the carefully "separated chambers" of the criminal mind. He could see that the murderer embodied “a separate alien nature which contradicts his own.” [p.258] Emily also shares another De Quinceyism. "Father believes that nothing is ever forgotten." In other words, that we may bury things but they are never dead and gone. Some murderers (and dare we say, some opium-eaters, some policemen, some politicians) are responding to remembered or not remembered childhood experiences, family secrets, bullying or abuse. Some are reacting to repression and the need for outlets for too controlled emotions. De Quincey has intuited the idea of the subconscious, of the shadow, and also the idea that some dreams constitute an effort by the subconscious to communicate with the conscious self. Often with the use of symbols and images, of parallel feelings rather than exact duplication. Delusion, rationalization, obsession, compulsion, frenzy, outward and visible signs, lead him directly to explorations of the inward origins of criminal behaviour. Is it genetic, blood memory, misplaced identification, self-delusion that the "necessary casualties," [p.243] collateral damage, contributes to the greater good? Is it a copy-cat and if so, what is it that is being copied? Is it fratricide? Patricide? Or are lower forms of motivation involved, sexual deviance, personal revenge or retribution or some form of warped redemption? A simple enough point but one not always acknowledged by civilians. That there are different kinds of murder, and different kinds of murderers. Well, as De Quincey too often does, remembering that he was likely paid by the word, the list of ideas could go on and on. I guess the important point is, dear reader, are you interested in ideas or are you not?

Personally, I could dispense with nineteenth century novels, or action suspense thrillers, or blood and horror. With the Gothic, even if its "melodramatic devices are symbolic manifestations of the character's own unconscious fears or spiritual confusion." [Beckson & Ganz] But I do like detectives and detective stories, psychology, criminology, history, literary writing, and I really like novels that make me think. Whatever you like, with the possible exception of romance (of which there is not more than a hint and a wink), there's something to get your jaws into here, in David Morrell's Murder as a Fine Art.