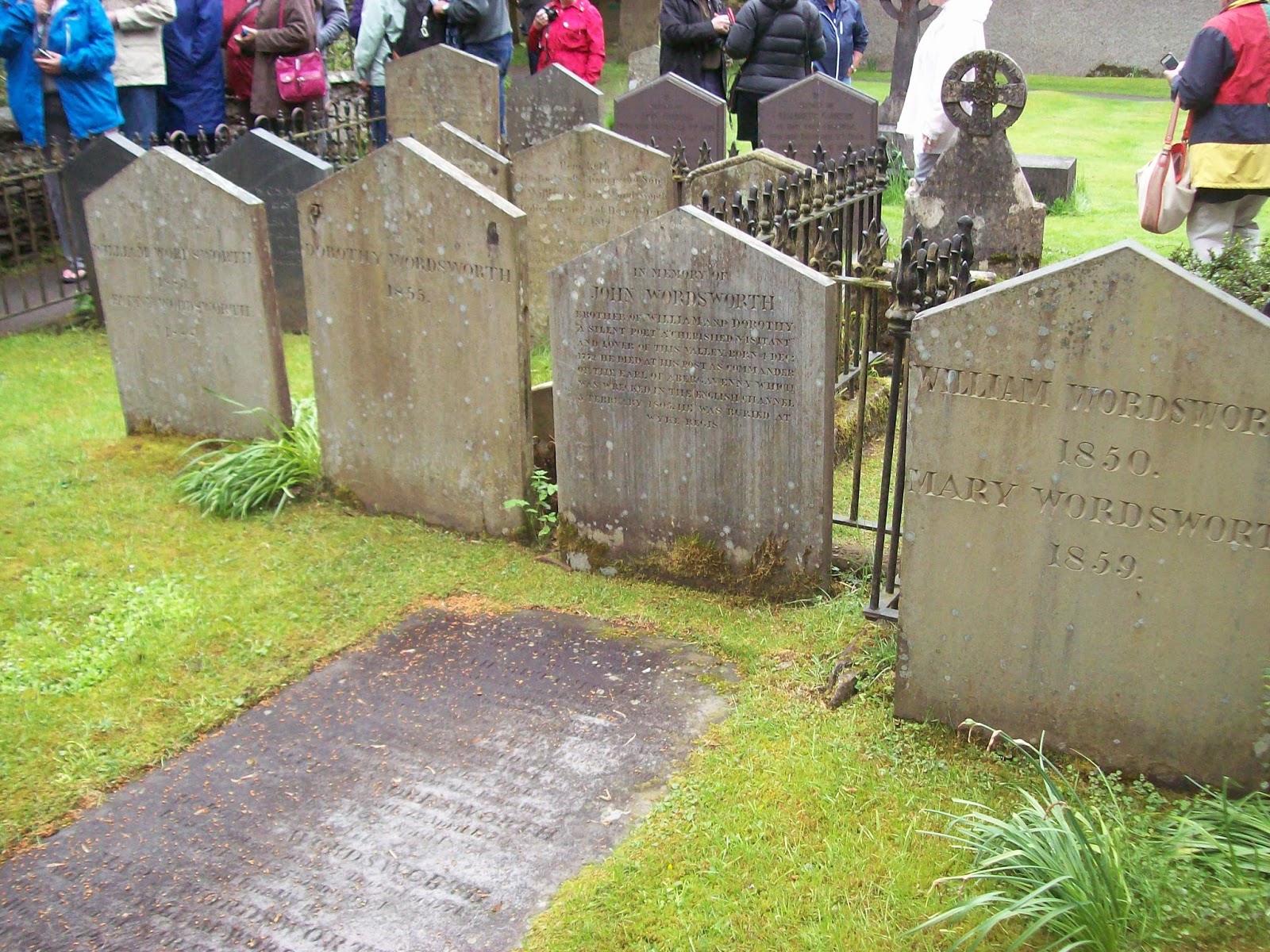 Attacking Murder as a Fine Art 2 - As Historical Fiction With Literary Pretensions?

The Wordsworth Family Graves in Grasmere. An alibi.

(5) Murder as a Fine Art is a novel in the style of the nineteenth century. And it is also an "historical novel," set in a specific historical time and place which is recreated for the reader. Could we not whack some of this history on the head? The tasty historical tidbits about architecture and construction, art, music and opera, medicine (chloroform, cholera, Florence Nightingale), politics (Lord Palmerston,1848, the Year of Revolutions, the Charge of the Light Brigade), economics (the British East India Company and the trade in tea and opium). Surely Morrell is not hinting at some connection between imperialism and wily politicians orchestrating empire in the service of evil capitalism? The scenes in Coldbath Fields Prison introduce historical details of prison design and Jeremy Bentham's ideas about prison reform. Emily's bloomers comment upon fashion and fashion victims. Do we really need to know about all the parks, squares, streets, neighbourhoods, from the Marble Arch to Piccadilly, the air balloon rides in Vauxhall Gardens? It's easy to get lost in this green maze. [p.191] It may be interesting to know that Madame Tussaud had set up her museum on Baker Street. With a Chamber of Horrors. Really? The public paid to see effigies of murderers and their victims? Why? Why did they? Why do they? How are the five dozen daily newspapers significant? Or railway time and the telegraph? Or the ever-prevalent poverty, the homelessness, troubled youth, the thousands of beggars? Well, yes, true. De Quincey had lived among them as a homeless youth himself. His knowledge of their culture helps him set traps for the murderer and makes it easy for Morrell to include several marginalized and invisible genders and underclasses as characters, as elements of plot, making them visible and relevant. All right. But maybe not all readers find history as interesting,

(6) Well, what about Murder as a Fine Art's literary pretensions. "De Quincey is a literary luminary battling a brilliant murderer." Could we not give this literary head a whack? De Quincey as a literary luminary has celebrity, and the misreading of his works by people with their own agenda puts him at risk of retaliation. Surely nobody would consider assassinating a writer? Trotsky was a politician. John Lennon was a musician. Salman Rushdie is still among us. Rohinton Mistry. Lawrence Hill. Seems a bit far-fetched, does it not? De Quincey is not an actor, or a president. Surely people are not targetted for their ideas, or for how well or how poorly they communicate them? Just because De Quincey was literary, a professional writer, is no guarantee of a literary novel.

What does it mean anyway? Literary? Including allusions to other stories, works of art, mythologies. Well, I guess he does this. There is a reference to the many-armed Kali, Hindu goddess of death. [p.166] There are references to his friends, Wordsworth and Coleridge. To wailing banshees. Literary implies using language in more than simply utilitarian ways. I enjoyed hearing of all the lost words from Victorian times: dollywop, linen lifter, dustman, mudlark, rookery, clacker, clostermonger. Of the origin of "screws," and of Piccadilly and other place names. Of the fatal link between hashish and assassin. Literary implies also a use of imagery and symbolism, not just for decorative purposes but to further plot, character, theme. Well, from the sixteen chapter titles we get: artist, death, monster, sublimity, garden of pleasure, shadows, interpreter, education, inquisition, woman of sorrows, effigy, sigh from the depths. Several are lifted directly, in other words, allude to De Quincey publications. Set together like this we see a confluence of spirituality/religion, psychology, and crime. Subjects which are supported by recurring motifs. Blood. Knocking on the doors of crime scenes. And the theatrical motif, the recurring use of deception and disguise, with its connection to identity. Who are you really? Who is as they seem? The murderer uses makeup. The streetwalkers rehearse to accost De Quincey in the park, like choruses from Greek drama. Thugs infiltrate the opium caravans. Murderers infiltrate . . . a wounded man bellows, roars [p. 255], like a dying bull. Diction and allusion. Aspiring to something beyond the page.