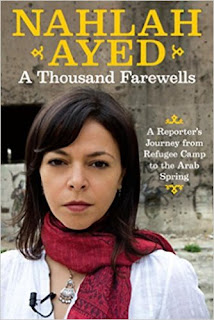 This non-fiction book appealed to me because Nahlah Ayed is an Arab-speaking journalist who was born is Winnipeg and attended my Alma Mater, the University of Manitoba. A Thousand Farewells documents her seven years working for the CBC, living in and reporting from the Middle East, from about 2005 to 2012, up to the Tahrir Square protest in Egypt and the beginning of "the Arab Spring."

Ayed's account is eye-opening to me. I know next to nothing about the geography and the human history of this troubled region. News reports seem catastrophic, confusing, and predictably pessimistic. The best I can hope to do is to assist, or support my government's assistance, in whatever way is realistic and to try to do no harm. (For example, by not bombing, which hurts innocent individuals, property, and the economy.)

In A Thousand Farewells, Ayed attempts to explain to the uninitiated, across cultures, the events, the issues, their historic origins, the current context, and the way they impact individuals. She communicates her understanding of her mandate as one verbalizing and then writing first drafts of history. She stresses her credo that "People are not quotes or clips, used to illustrate stories about war and conflict. People are the story, always." And she does not stint on sharing facts about the stresses and physical threats of living in, rushing towards, war zones. An existence, as they say, like the pinball in the machine, moved by, responding to, the actions of others. Subsuming any semblance of a personal life to the demands of career and calling.

Ayed's account is by no means prescriptive. She shares what she knows, gathered from observation, experience, interviews, and reading. Several motifs and themes stand out for me. That the Middle East is not a place of homogeneity. That there are many different groups, including many different Muslim groups. That many of the conflicts and rivalries have ancient roots. That in some ways, religion is the opiate, encouraging people to accept the status quo. That the status quo includes fewer rights for women. That when refugees flee, they are "voting with their feet." That when colonial powers interfere, it almost always makes things worse. That equating democracy with majority rule will be problematic (as religious extreme parties may be voted in to replace dictators or military rule). That the focus will be on "human rights" for everyone, including the right to citizenship. That any successful change must come from within.

Ayed witnessed events which helped her feel optimistic. In Egypt, people lost their fear and assembled and voiced their opposition to a dictatorship. And, during one of the protests, she saw Muslims protecting Christians and Christians protecting Muslims, taking turns while the other group prayed.

Reading A Thousand Farewells has made me both a better Canadian and a better citizen of the world.
at February 12, 2016