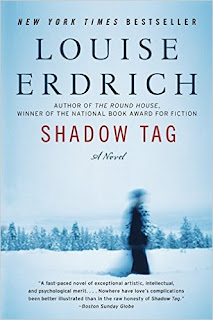 I finally found some Louise Erdrich books in Bellingham last year, gifts again. I read 3. The Painted Drum. (My favourite. Like that old John Buchan book, The Path of the King, about the spirit which transfers with a family object, the sacred duty which comes along with sacred possessions.) The Round House. The Bingo Palace. I noticed a definite development in style as LE has been publishing for over 20 years. I love the books because they meet my preference of Canadian or almost Canadian.* These stories are set on a reservation in North Dakota, very close to my home of Manitoba. LE now lives in Minneapolis and owns the Birchbark Bookstore.

I picked up this Shadow Tag book at a library book sale and read it quickly in order to be able to pass the complete stack along to another avid reader. Shadow Tag is a sad and disturbing story of a marriage gone wrong, between a painter Gil and his model Irene. There are interesting subtexts about the modelling relationship (posing ensures distance, the gaze is a way of seeing and not seeing at the same time.) About George Catlin and the portrayal of First Nations in art. About alcohol as a means of controlling others and evading personal responsibility. And about the Jungian idea of our "shadow" and of healthy (embracing) and unhealthy (detached, projecting) relationships with it. Interesting, but, wherever a bad marriage and children are involved, predictably sad.

* (Other "almost-Canadian" writers, whose territory borders Canada: David Guterson, Snow Falling On Cedars (set in Pacific NW, filmed in Greenwood, BC). Marilynne Robinson, Housekeeping and Gilead, set in Idaho. Housekeeping was filmed in Nelson, BC. Gary Snyder, grew up in the Skagit Valley. Riprap and Cold Mountain Poems, The Back Country. The Practice of the Wild. Jack Kerouac, The Dharma Bums, Desolation Angels, set in the Cascade Mountains, south of Hope, BC. Richard Ford, Canada, set in Montana and Saskatchewan.