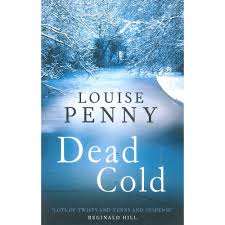 In the Midst of Winter, I picked up this paperback copy of Dead Cold at a library book sale, not recognizing the cover or the title. But, slowly, I realized that I have read it before. Although, confession, I remembered the recurring characters (Chief Inspector Gamache, Beauvoir, Nichol, painters Clara & Peter Morrow, the Three Graces, the mad poet Ruth, Myrna and the B&B owners, the town of Three Pines) but I had blanked out the evil characters - the self-help writer, the ineffectual husband, the damaged child - and some of the most important plot points including the murder scene and the fire and the denouement. Strange. I have read several other Louise Penny titles starting with her first, Still Life. I love her settings in Quebec, Montreal & the Eastern Townships, her details of the artists' points of view, the moral and ethical challenges of police work and workplace conflict. So much to grab on to, including suspense, and what we all look for in crime/murder mysteries - the surprising resolution, with every dangling thread neatly knotted at the end. Well, almost every thread.
at April 12, 2016