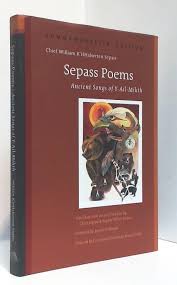 Chief William K'HHalserten Sepass lived around what is now the British Columbia city of Chilliwack from 1841 to 1943. In 1911, when he was in his 70s, he arranged with a local settler woman, Sophia White Street, to translate the hereditary texts of his people's oral tradition --- Ancient Songs of Y-Ail-Mihth -- into English. The chief had worried that the teachings would be lost. He saw translation and publication as a way to preserve and to share what former Lieutenant Governor Steven Point describes as "a profound legacy to future Xwelmexw generations as they continue to seek meaning and stability in an ever-changing modern world."

But these stories which begin "Long, long ago, / Before anything was, . . . " are important to others as well as to the original people. To all who have chosen to live here, within Coast Salish (Xwelmexw?) territory. Because if we do not introduce ourselves to these "creation myths," to the understanding of this place, its landscapes, and our place within it, we will never be "at home." Nor will we be able to fully acknowledge the "aboriginal" - meaning the "first, authentic connection" - between the human and this natural setting, between the human and the divine as it manifests here.

When we intrude and settle, when we bring foreign stories with us and attempt to graft them to this new place, we are remaining stuck in the COLONIAL MINDSET which assumes that knowledge, wisdom originates and is still situated elsewhere, and must be imported, and imposed / adopted by people who already have their own stories. Without realizing that to transport mythology, to import it, insults those people who are already here, who already know. People who have been displaced but neither dispersed nor destroyed. Who are still experiencing, perhaps suffering from Accidental Racism*, which I have written about elsewhere. accomplices.blogspot.ca/ acrossculturaleducation.blogspot.ca/

We read these stories, take them in, incorporate them into ourselves, not to appropriate them but to honour the people, their culture and language (Halq'emeylem), their concepts of good and evil, of greed, temptation, cooperation. Of living in harmony. Of a time before humans. Of Ka:ls, the divine one, the Transformer (although this word does not appear in this text). We learn the stories of an unlucky lake. Of creatures with varied colours and "personalities" who were all here before us. We read these stories to enlarge ourselves. We place them side by side with our personal ancestral canons which also sing of the dance of human and divine.

Beautifully illustrated by Lynne Grillmair, incorporating the original art from George Clutesi found in the 1963/1974 editions.

This one goes on my Sacred Texts bookshelf. Can you believe that I found these 2 copies of Sepass Poems at the library book sale? Stamped Discard?

* accidental racism - the unchallenged assumption that what "we" know, what we were taught, and the way we were taught is the best way, superior to all others
at April 12, 2016