Toward the End Of Time 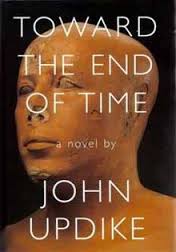 Ben Turnbull is 66 years old, living near Boston, beside the sea, in 2020, after the destruction of the Sino-American War. Government has disappeared. Entrepreneurs are moving in to offer services, and are in turn being encroached upon by corporations. The chaos in society is parallelled in the chaos of Ben's golf game.

Ben is mostly retired from a financial planning job, unhappily married to his second wife, remembering countless flings and mistresses. He has adult children, step-children, and grandchildren, a fact which seems to be related to his neurotic anxiety about the distant future and distant galaxies. He struggles to recover from a prostate operation. The only good thing in his life seems to be a heightened awareness of the miracles of nature which surround him. Like the black holes in space, there appear to be a few holes in the cheese of his brain, leading him to recall his time with St Paul and, later, as an inhabitant in an Irish monastery during a Viking invasion. The "End of Time" alluded to in the title is personal, cultural, planetary, cosmic. While the journal entries which compose this novel are his attempt to comprehend and control, time and time warps evade his pen.


Personally, I got that his mind is a bit discombobulated and I did not really need all these words and descriptions. I also got that he seems to be a man led, driven, solely by lust and his own physical sensations and gratifications. His abstract scientific mental meanderings are an unconvincing attempt to know the unknowable. Although the dystopic vision of a post-apocalyptic planet does somehow ring true. And in the final identification with nature still dominated by human Old-Think, the narrator offers the reader a glimmer of hope that he may have seen some light.
at September 28, 2016