An intriguing concept--an Indigenous woman, Cree from northern Alberta, moves to Gibson's because she is obsessed with actor Pat John, who played Jesse in The Beachcombers series. I really like the use of Cree words and modern versions of Cree legends used to anchor each chapter. I was confused by the reference to "the San" which I assumed meant a TB Sanatorium but is instead a reference to a mental hospital in Edmonton. Bernice (Birdie) suffers recurring mental health challenges stemming from unaddressed childhood trauma and unresolved grief. Her aunt Val, cousin Freda, and employer Lola rally around her. Not an easy read but the style alone is enough to warrant a second reading. Love the cover illustration also. 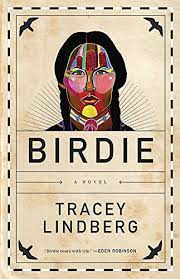