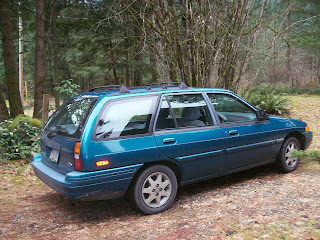 
I had to buy a new old car in October after I took mine in for an oil change and got that "oh, no!" phone call from the garage, something about a broken coil. I asked a friend who directed me to a friend who had his mother's car for sale. It is only one year newer than my old one, 1995, a Fort Escort station wagon, but it has less than half the km of my old one. 128,000 km, which is really good for something from the last century. My garage checked it over for me and said "Go for it!" It is starting to feel like mine. The gas tank is bigger but the mileage seems to be about the same as the old car, which is good. And I like the turquoise colour. I swore I'd never buy another black car because they just disappear in the dark. Camouflage is not the goal for defensive driving.
at December 14, 2011